Bramwell Tovey introduces A World Within 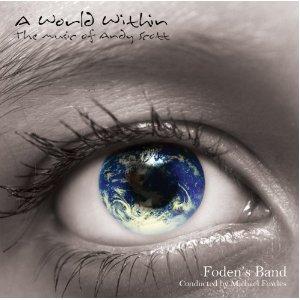 Leading conductor Bramwell Tovey graciously wrote the foreword for the A World Within CD, and his words encapsulate what continues to be a fascinating musical collaboration between Andy Scott and Foden’s Band:
“Fodens Band is a household name in the world of brass bands and has been for over a hundred years. This virtuoso group of brass and percussion players, based in Sandbach in Cheshire, England, thrills audiences year in, year out with its astonishing flexibility in a huge range of styles. The band has won so many titles and awards it feels superfluous to even allude to them.

Now, in alliance with composer Andy Scott, Fodens is breaking new ground. Within a very short period of time Andy has grown to love the medium and completely mastered the considerable complexities of brass band scoring to produce a wonderful album of original music.

A saxophonist with a background in jazz and big bands, Andy has brought to his brass band writing the substantial influence of his jazz background with its reliance on improvisation and spontaneous creativity, while understanding that sophisticated orchestration and notation lead to the magical emotional core of the brass band sound. It's as if Stan Kenton and Harry Mortimer had discovered they were separated at birth.

Fodens' soloists are all on top form. Listen to John Barber's searing trombone in "A World Within", or Glyn Williams extraordinary solo euphonium in "My Mountain Top", or the silky sound of Mark Wilkinson, the band's esteemed principal cornet as he sings the gorgeous pentatonic lines of the beautiful "Fujiko", my personal favourite.

The images conjured up in this work (beautifully arranged by Jim Fieldhouse), and in  "Battle of Barossa" are from a hugely talented  composer using his artistry to communicate fresh ideas through a traditional sound. The language is richly tonal, yet never predictable, always leading the listener with haunting melodic lines, extraordinary ensemble work of great rhythmic drive and an expressive centre which feels completely organic territory for brass bands.

As for Fodens Band, well, they continue to amaze as they embark on a second century of music-making.

The combination of Fodens and the creative sound world of Andy Scott, is simply irresistible.”